Discovar de novo is a next generation sequence assembly program. The program was developed by the Broad Institute and was released late in 2014. Discovar de novo is designed for 250 bp long illumina reads with the PCR duplicates and adaptor sequences removed. The following webpage contains the manual as provided by the Broad Institute (http://www.broadinstitute.org/software/discovar/blog/): 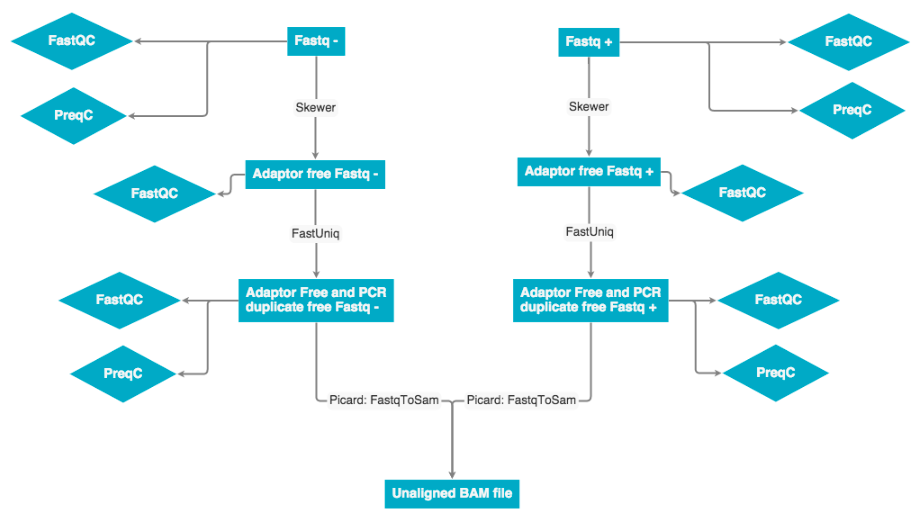 All unaligned BAM files are then passed into Discovar de novo. The output is an assembly in .fasta format and Discovar de novo visualization files. The .fasta file can then be re-scaffolded with a scaffolding program (see next workflow). The finished file can be represented on the UCSC genome browser. 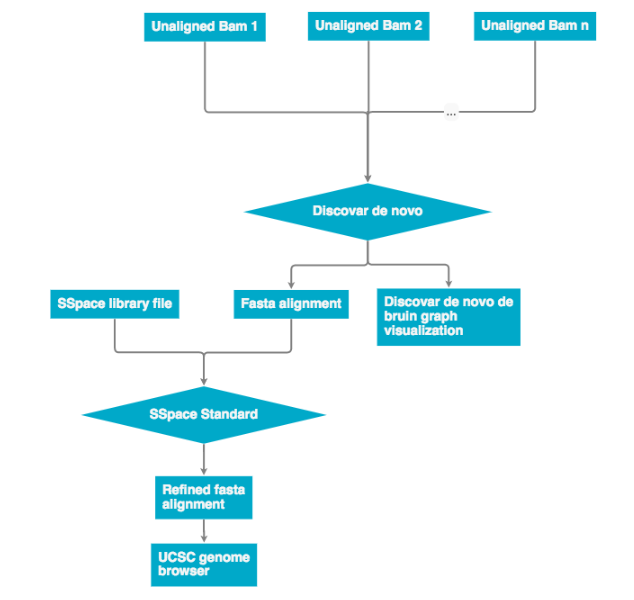 Discovar de novo currently does not support mate pair libraries. To incorporate these data the program a program SSpace was used to re-scaffold the Discovar de novo fasta output. The workflow below describes how mate pair libraries are processed and factored into the assembly. The SSpace library is a small text file that points to the libraries and provided meta data statistics. Please see the 'Programs used' section for SSpace citation and further details. 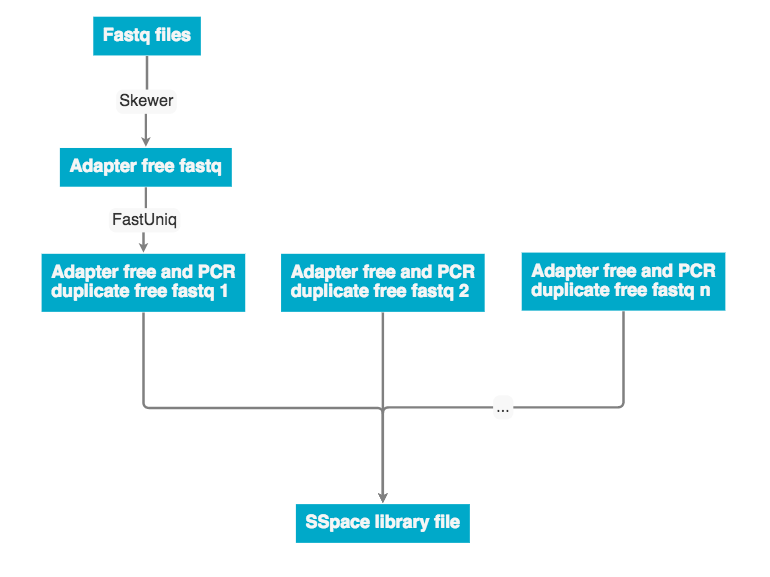 After removing adapters and PCR duplicates, we run FastQC in two of the libraries. In general, the quality of the reads decrease in the last base-positions. Also, read 2 of the SW019 library shows problems in the per tile sequence quality. Bellow are the pdf files with the fastqc for the PCR and adapter removed libraries. The protocol we used to run fastqc is uploaded in this link: fastqc. The path to the files is: campusdata/gchaves/fastqc_trimmed_PCR_duplicates.

Discovar de novo was designed for very specific data. To test the validity of our data we perform different test runs. The test runs used a percentage of data from the libraries available. All the tests were run on .bam files. The log files were run on edser2 or campusrocks nodes with more than 200 GB of RAM available. The run logs are stored as .txt files. The full logs can be seen on the wiki here,

The logs are very large, important statistics have been gathered and are compared below. Note that MPL1 is an acronym for mean length of first read in pair up to first error.

Our fasta assembly files are located at

Each fasta assembly is in its own directory, the directory name is the assembly name. Currently there are five assemblies, The final fasta file is name a.lines.fasta. Note originally the authors used the a.fasta file (which contains the reverse complement of every contig) for statistics. Consequently statistics were falsely reported as twice the actual number until May 15th 2015 when the error was identified. The statistics have since been corrected.

Raw stats were mined from the fasta files using a python script fastaStats.py. The script is available online at (https://github.com/ChrisEisenhart/binfProgs/blob/master/basicProgs/fastaStats.py).

The absolute path to our latest assembly in .fasta format is;

Looking at the 10% run, the majority of scaffolds generated are quite short (<1kb).

When a similar histogram is generated for the assembly made with 50% of the SW018 and SW019 reads from UCSF, you can see that the average scaffold length is higher and there are quite a few more scaffolds that are over 10kb.

The program SSPace (documentation below) was used to scaffold the the assembly with mate pair data. The UCSF SW041 and SW042 mate pair libraries were used to generate the library.txt file.

The .fasta assemblies were run through BLAST. The results are below,

There seems to be a very high sequence identity with Notopygos (http://sv.wikipedia.org/wiki/Notopygos)

The program, its location, and a brief, (brief!) explanation of what the program does

GCC is a compiler for the GNU operating system. Webpage: https://gcc.gnu.org/.

A program for scaffolding fasta files, written by Marten Boetzer and Walter Pirovano. The authors are very protective over the use and citation of this program. The program can be obtained by at http://www.baseclear.com/genomics/bioinformatics/basetools/SSPACE.

where is your script fastaStats.py in the BME235 directory? I tried to use your script after downloading it but it needs the fastFunctions module and I can't find it.

Get the entire source through git, or you can find the fastFunctions.py file specifically. It needs to be in the same directory as the fastaStats.py file. I will put both of them in the BME235 bin so you should not have to worry about it.

Thanks for the headsup

EDIT: Both are in the BME235 bin, if you have it on your path you can run the program

Your BLAST hits seem to be to the 18S ribosomal subunit, which is not extremely helpful. I'd rather see blast (or megablast) hits for just the longest few contigs.

BWA mapping of the longest contigs onto the old assembly of the mitochondrion would also be useful.

The histogram of contig lengths would be much more useful if the y-axis were on a log scale. In general, when you are interested in the tail of a distribution, then a log scale for the counts or probabilities gives you a much more informative view.

Good point, thank you for the suggestion. The histogram plot has been adjusted accordingly.

Although the new histograms look better, the log scaling is not done well. You should be plotting on a log scale with proper log-scale tick marks, not plotting 1+log(x) on a linear scale. Please use a plotting package that has proper log scales—whichever one you are using looks rather unprofessional.