SOAPdenovo2, the latest version of SOAPdenovo, has the advantage of a new algorithm design that reduces memory consumption in graph construction, resolves more repeat regions in contig assembly, increases coverage and length in scaffold construction, improves gap closing, and optimizes for large genome. 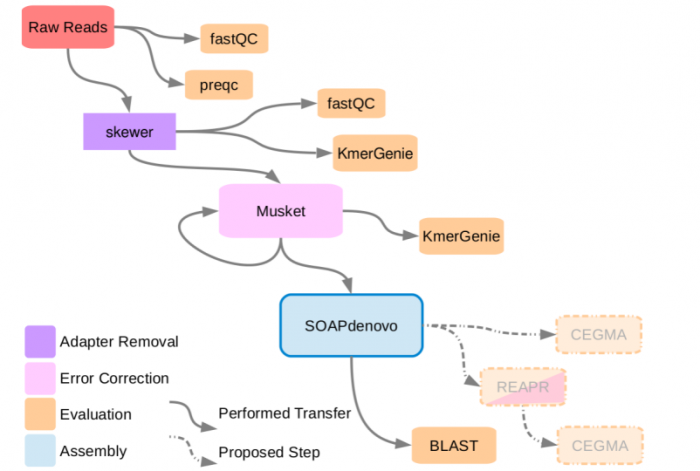 Fastuniq is a replicates removal tool for de novo assembly

Musket was used for error correction on the data sets.

KmerGenie was used to determine optimal k-mer size for de novo assembly. The program produces abundance histograms for many values of k, and then predicts the number of distinct genomic k-mers, returning the k-mer length which maximizes this number.

One of the key advantages of SOAPdenovo2 is the ability to select a range of k-mers for the de Bruijn graph assembly step of the genome assembly. This feature is activated through the use of two commands:

-K to select the low end of the kmer range

-M to select the high end of the kmer range

Builds a highly reliable set of gene annotations in the absence of experimental data. Defines a set of 458 core proteins that are present in a wide range of taxa. Since these proteins are highly conserved, sequence alignment methods can reliably identify their exon-intron structures in genomic sequences.

QUAST computes a number of well-known metrics, including contig accuracy, number of genes discovered, N50, and others

GapCloser significantly decreased the number of Ns in the gap-closed scaffold from roughly 17% to 1.2%, resulting in the decrease in the genome size approximation, the Size_includeN parameter

Using the 6 largest scaffolds from the full assembly (Run 3)

Aplysia californica was first when sorted by E value

It was the first mollusk to be sequenced