Remarks from Stefan about preqc:

The genome size (estimates to be 2.29Gb) is more like what we expected after Kevin's prediction in one of the last courses (2.3159 Gb). 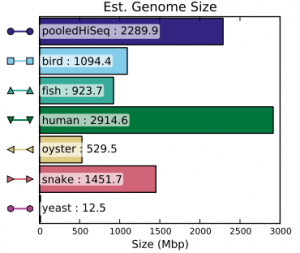 The “Simulated contig lengths vs k” is very low, as we expect, since this analysis didn't include long insert mate-pair libraries. This statistic will go up once MP's are included. 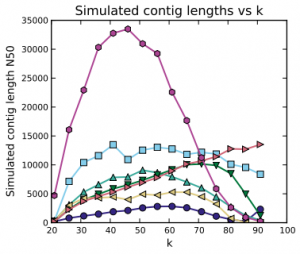 There seems to be low duplication levels.

The “Mean quality score by position” and the “Fraction of bases at least Q30” show that the reads are pretty high quality. And the “k-mer position of first error” and the “Per-position error rate” show that errors are very infrequent and again, as expected, increase in frequency at the end of the reads

The “Estimated Fragment Size Histogram” estimates one library to around 350bp and the other to around 450bp fragment length.

The “51-mer count distribution” estimates the current coverage to slightly more than 10x, but this statistic often underestimates the real coverage. Based on the number of reads it's probably closer to 20x.

“GC Bias” indicates some bias in the data.

So, overall, it tells us that the genome is quite big (maybe around 2.3Gb), that we definitely need more data (but remember we didn't include all data in this analysis and that there is more data coming) and that the assembly will be very tricky (mostly because of a high repeat content). If you remember my lecture, the presence of many long repeats makes de-novo assembly much harder.

These data with the adapters removed are located at

This section contains various notes made when doing a second pass in analyzing the presence of potential adapter sequences in the raw .fastq datasets.

The adapters used for both runs were AGATCGGAAGAGCACACGTCTGAACTCCAG (-A option) and AGATCGGAAGAGCGTCGTGTAGGGAAAGAG (-B option).