A draft mitochondrion assembly was made by Kevin Karplus in 2012.

The goal in 2015 is to create a high coverage, closed mitochondrion assembly.

You can view the mitochondrion assembly on the UCSC genome browser by following instructions posted on the wiki. It is currently showing the first Discovar de novo assembly generated using only the HiSeq SW018 reads.

The first step taken was to map reads from the HiSeq SW018 and SW019 reads against the 2012 draft genome. Reads were then assembled using Discovar de novo, first using only the SW018 reads (assembly mitochondrion_SW018_discovar) and then using reads from both SW018 and SW019 (assembly mitochondrion_SW018-9_discovar). This second assembly produced two long contigs that appear to be the majority of the mitochondrion genome since the length of both summed is close to the expected genome size.

A second iteration of read mapping was done using the first 2015 assembly and mapping SW018 and SW019 reads against it, to try to pull out any more reads that belong to the mitochondrion. This assembly has a smaller N50 and a smaller total length, and therefore the iterative mapping was not continued for more iterations.

For comparison, the mitochondrion size of the closest related molluscs that have mitochondrion assemblies are 14,100bp (grove snail - Cepaea nemoralis) and 14,130bp (land snail - Albinaria coerulea). But there are mollusk mitochondrial genomes that are much larger: sea scallop Plactopecten magellanicus is reported to have 30.6-30.7kbp (David R. Smith and Marlene Snyder. Complete Mitochondrial DNA Sequence of the Scallop Placopecten magellanicus: Evidence of Transposition Leading to an Uncharacteristically Large Mitochondrial Genome. J Mol Evol (2007) 65:380–391 doi:10.1007/s00239-007-9016-x).

It looks as though the majority of the mitochondrion is in two contigs in the assembly using both the SW018 and SW019 assemblies. One of these contigs is 12,884bp and the other (which is the second largest contig) is 3,425bp.

Most of the other contigs generated are quite small (200-400bp) and largely look like repeats.

The COX1 gene was compared (using blastn) to the COX1 gene assembled from the 2012 assembly, which came from a different specimen of banana slug. The two gene sequences are 100% identical over 100% of the sequence, meaning that the two specimens were both from the same species of banana slug.

Scaffolding with mate pairs to try and close gaps

In an attempt to close gaps between scaffolds, the reads from the SW041, SW042, and lucigen mate pair libraries were mapped against the assembly. This was done using bwa samse for each the forward and reverse reads for each library, after which the resulting sam file was visualized using Tablet. Tablet allows the user to see which reads mapped to which scaffolds (and where). For each sam file/mate pair library, the following characteristics were recorded for each read that mapped to the mitochondrion assembly: 1) the name of the read, 2) what scaffold it mapped to, 3) its orientation on the scaffold. This was done for both the forward and reverse reads, and then any pairs where both reads mapped were noted. The hope was that there would be a pair where each read mapped to a different scaffold, but that was not seen.

The results are shown in the table below. For each the SW041 and SW042 libraries, you can see the reads in the forward files that mapped to the mitochondrion scaffolds, what scaffold they mapped to, and the orientation of each read within the scaffold. You can then compare this list against the list of reads from the file or reverse reads. If a forward read is listed but there is a blank space on the reverse list (or vice-versa) it means the mate did not map. None of the lucigen mates mapped to the mitochondrion assembly, which is why the lucigen library is not shown below.

This result shows that the mate pair libraries will not be useful in scaffolding together the mitochondrion assembly.

It would be useful to map all the paired-end reads to the mitochondrion contigs, but using a mapper that shows multiple mappings, not just the best or a randomly chosen good mapping. That way we should be able to see reads that join neighboring contigs, with multiple mapping for the forking. Mining the data to extract conjectures about copy numbers and what is adjacent to what can be frustrating, though, and it may be quicker to do PCR to join the contigs, as suggested below.

Primers were designed to amplify the regions between the two largest scaffolds. These two scaffolds likely contain the majority of the mitochondrion genome (explanation above).

There are several important considerations for primer design:

A first attempt at primer design can be seen below. Three sets were designed in case one set does not work as well as expected. These primers should be verified by somebody with experience designing primers before being ordered.

The sequence of the two largest sequences can be seen here, with the primer sequences highlighted in red.

Originally we thought that the mitochondrion was in two contigs - one at 12,844bp and one at 3,425bp. Blasting these two contigs against one another results in no significant similarity being found. The expected mitochondrion size is ~14,000bp, based on the size of other mollusc mitochondria (all are within a fairly small range around 14,000bp)

Running the PCR was challenging because there is extremely little DNA left from the banana slug specimen. Steven found some very small remnants in a leftover tube and ran the PCRs. Here are the results: 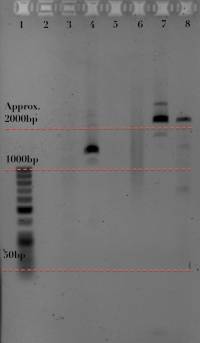 Unfortunately we were expecting a smaller product, and so the ladder used does not extend to large enough fragments. However, using a 10kb 2 log ladder we were able to estimate the size of the PCR products.

Primers used in lane 4 were: 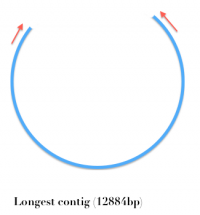 Primers used in lanes 7 were:

These results suggest that both contigs would be “circularized” by the PCR products that were amplified. This is somewhat surprising for the second, shorter contig.

There are multiple explanations for why both fragments were circularized during the PCR.

PCR products were sent for sequencing a second time, this time after a size selection on the strongest band. Results were essentially the same.

The mitochondrion assembly is being worked on by Natasha Dudek (natasha@dudek.org) from Team 5: Discovar de novo.

That chromatogram looks like two different PCR products are superimposed—there seem to be always either one or two traces high. Disentangling two DNA reads is difficult in Sanger sequencing, unless you have a very good guess at what one of them is. I'd want to see the beginning of the chromatogram, though, rather than the end, as the end is often out of sync.

A better base caller would give you the appropriate ambiguity code, rather than just N, which might provide some hope of finding the sequence in the genome. If one of PCR products starts in the mitochondrial sequence where we expect, then we could subtract the (short) piece that we assembled to get a short sequence for the other piece.

You could try PeakTrace Online (http://www.nucleics.com/peaktrace-sequencing/), though I suspect it only reports N for ambiguous bases also—I don't know whether any of the Sanger basecallers properly report the correct ambiguity code for 2 bases.

Update: mitochondrial PCR products from July 20th, 2015 have been sent to UC Berkeley for Sanger sequencing.