The current version installed on campusrocks is 1.1 (official release).

Jellyfish is a tool for fast, memory efficient counting of K-mers in DNA http://www.cbcb.umd.edu/software/jellyfish/[1]

The Jellyfish “stats” option allows for a bounded dump of the kmer table, using -L for the lower bound and -U for the upper bound. Using this, we can examine high frequency kmers for abnormalities.

The documentation is at www.cbcb.umd.edu/software/jellyfish/jellyfish-manual.pdf

Here is a plot of the frequency of multiplicity for k-mers in the Pog data. Note that 10-mers are too short and many occur with high multiplicity. For 15-mers and longer, there is a nice peak around 47 (drifting downward a little for longer k-mers). The curves can be fit pretty well with a gamma distribution. Below a multiplicity of around 16, the counts shoot way up due to sequencing errors. There is a heavy tail of high multiplicity k-mers, due to repeat regions and the Pog virus.

We can estimate the sequencing error rate by counting all kmers (not just distinct ones) with multiplicity less than where the minimum occurs, and divide by the total number of kmers to get the fraction of bad kmers. Dividing again by the kmer length gives us a per-base error rate, which for the Pog 454 data is about 0.5% (no matter which of the long-enough kmer distributions we use). 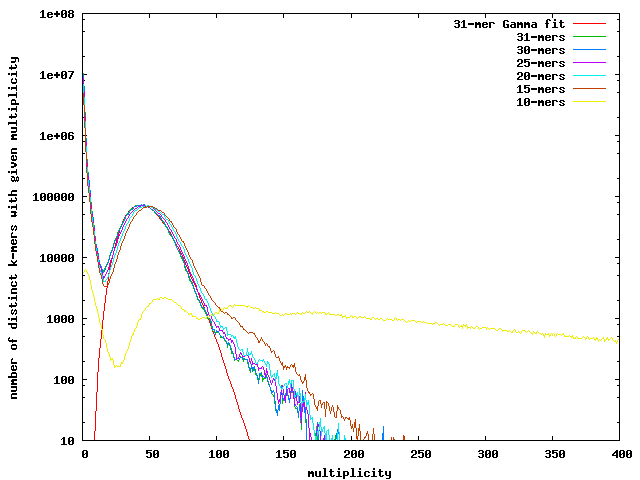 Similarly, we ran Jellyfish on the first run of Illumina sequencing for banana slug to count 22-mers. This plot shows the same pattern of a high counts for unique reads that descends to a minimum before peaking and continuing out in the long tail. The minimum occurs around 3 so we can consider 22-mers with a count of 4 or higher to be correct. From this we find that 7.61% of 22-mers have at least 1 error so the per-base error rate is estimated to be 0.35%.

The large difference between these two estimated sizes is most likely due to repeat sequences. These are not taken into account when estimating the size using only distinct 22-mers. The larger estimate is probably closer to the actual size. 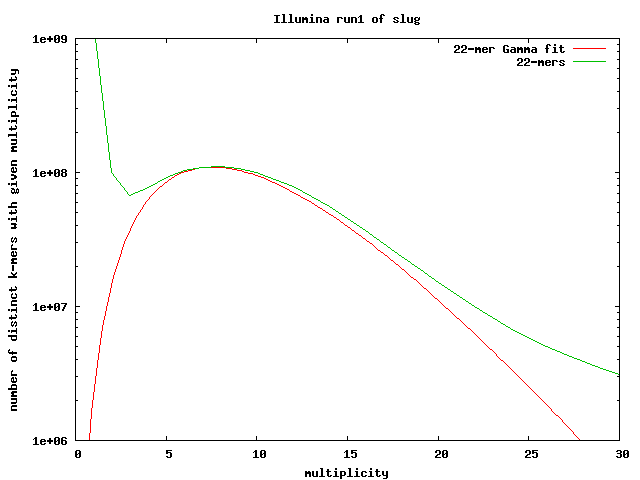 For run1, the first few distinct kmer with the specified multiplicities are

After running SeqPrep, using all the illumina data produced 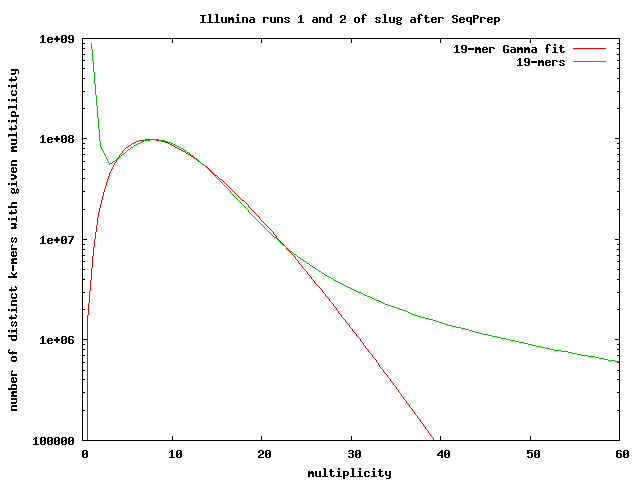 The fit-gamma-illumina-all-seqprep.gnuplot script gives an estimated coverage of 10.247. If we divide the total number of k-mers (23731306715) by the approximate coverage, we get a genome length of 2.3159 Gbases.

Of course, the gamma distribution is almost certainly the wrong distribution to use here. We probably should be fitting a more realistic model of the problem. We expect to see multiple peaks, from different causes. The peak at low multiplicity should come mainly from sequencing errors, though it could also come from copying errors in the PCR amplification in creating the initial library, and from polymorphisms in the initial population of cells. (For metagenomic libraries, that polymorphism may be a major contributor to the initial peak.) The main peak at medium multiplicity should be from multiple copies of the same location in the genome. If a k-mer occurs n times in the genome, we would expect to see it n times as often in the sequencing, so there should be additional peaks for k-mers that occur in repeats.

If we have N error-free k-mers sampled uniformly from a universe of D distinct kmers (the no-repeat situation), we would expect a binomial distribution, with D (N choose m)p^m(1-p)^(N-m) distinct k-mers with multiplicity m, where p=1/D. We can approximate this as normal(mean=c, variance=c), where c is the coverage=N/D).

If we have D_j k-mers that occur j times in the genome, with sum_j j D_j = G (the genome size), we expect about N j D_j/G of our samples to be from k-mers that repeat j times, and we can model the distribution of error-free reads as sum_j D_j normal(mean=j c, variance=j c), where c is now N/G. I (Kevin Karplus) tried this model and it is a terrible fit to the data. The coverage estimate is ok (around 45), but the variance for the normal distribution is much smaller than than the observed distribution, and we get very distinct peaks that are much too narrow. So my reasoning about the model must be wrong, but I'm not sure where yet.

If I allow the variance to be fit separately, I can get a pretty good fit with D1 normal(c,v)+ D2 normal(2c,2v), with the variance about 5 times bigger than I expected. Adding a third peak doesn't help much.

I found an answer, it works nicely with gnuplot.

Basically I ran jellyfish count with kmers from 11 to 31. I then ran jellyish histo for each of them.

Finally I wrote a script to generate a png from gnuplot.

I also have the same “effect” of this page, any kmer lower than 15 is pretty much useless. Well not useless, the it doesn't bring our the information of what is erroneous in the the reads.

May I ask what exactly you used to plot the graphs? Did you plot the output of jellyfish histo directly? Thanks

I added in two python scripts to BME235/bin: qseq2fasta and qseq2fastq, to parse the Illumina files. There is a faster implementation of the quality score conversion using a numpy array instead of ord→chr individually but I was having trouble installing numpy.

Be sure to use the -f option when running with Jellyfish. -f will filter out reads that did not pass the Illumina's filter.

Jellyfish has a new version that allows for fastq file input. I posted it in my public dropbox folder as the developer hasn't posted it to his website yet.

To use it with a bunch of fastq files that are gziped for example:

the last part /dev/fd/0 tells jellyfish to read from stdin. This is nice because you can run a program that converts qseq to fastq and pipes to stdout and then pipe that to jellyfish without having to worry about making tmp files if you don't want to make fastq files in the mean time.