BWA is a tool for aligning short reads to a reference genome using two different algorithms based on the Burrows-Wheeler Transform (BWT).

The first step in using BWA is building a reference database.

Their are two options for the algorithm. The default option, is, is relatively fast and works on genomes smaller than 2GB. The other algorithm, bwtsw, is slower and less accurate but works on longer reads and works with larger databases.

Next, the reads are aligned to the reference using the aln command.

The reads in the fastq file are aligned against the reference data base and the results are written to standard output in the .sai format.

The 'samse' and 'sampe' commands are used to generate single-end and paired-end alignments in SAM format from the FASTQ and SAI files.

Note that BWA does seem to accept gzipped files, so there is no need to ungzip the read files, though the documentation doesn't mention this.

The SAM formatted alignments include a column labeled “inferred insert length” by the BWA manual, but in the SAM specification it is described as the “template length” or distance between the leftmost mapped base to the rightmost mapped base. The second description seems to match the output of BWA. However, there are some template lengths that do not appear to be calculated correctly.

For example, these two reads make up a pair that overlaps.

Instead of reporting the total length, the length of the overlap is reported.

This explains the incorrect short lengths found in our histograms. This does not appear to affect the pairs that do not overlap and most of these overlapping reads that should be combined using SeqPrep.

Here is the frequencies of each inferred insert length from the SAM file from the paired end alignments for Illumina run 2. The mean inferred insert size for the barcode 7 reads is 258 bases and 138 bases for the barcode 8 reads. Note that this differs considerably from the estimates of 411 bp for barcode 7 and 372bp for barcode 8 from the computer_resources:data page, which was based on bioanalyzer results for the DNA library. What is the discrepancy? The difference is that the Bioanalyzer results include the adapters, not just the DNA that is sequenced, so the difference is actually fairly small.

Why does the barcode 8 graph cut off so abruptly? (overlapping reads?) 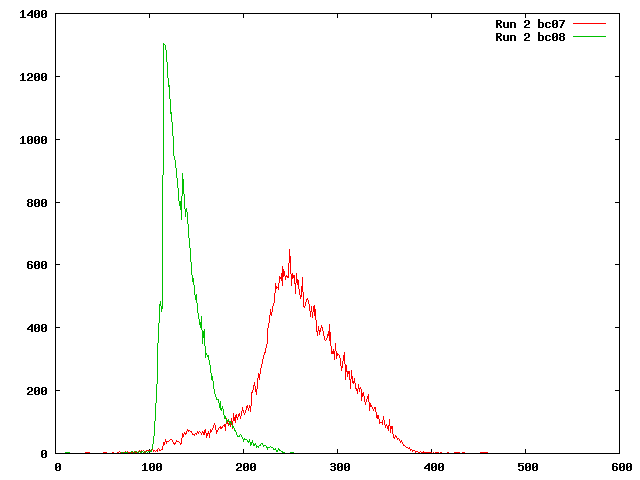 So what exactly is the “inferred insert length” being plotted here? After looking at the SAM format specification and some of the entries in the SAM files, it appears we are actually looking at the “template length”, the total length of each end read plus the insert size. 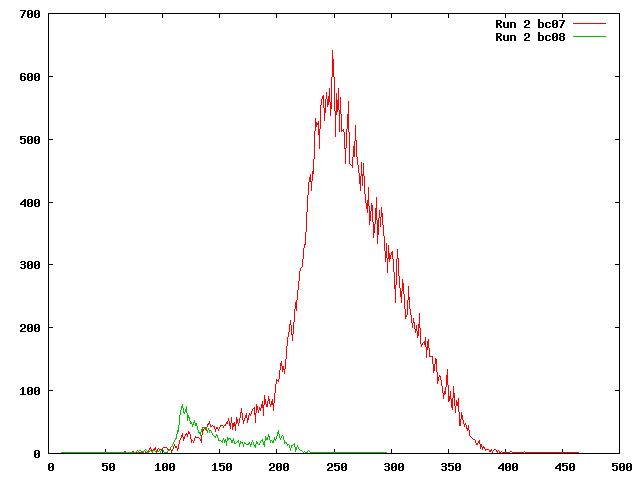 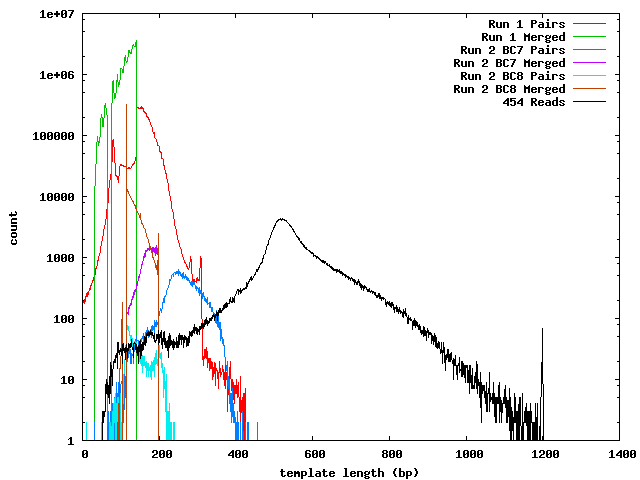 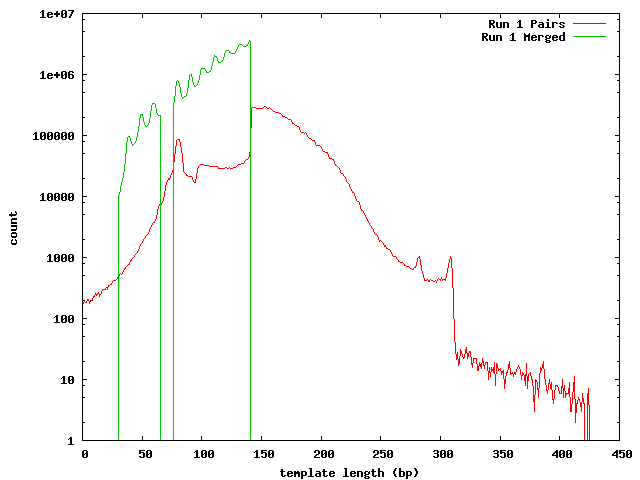 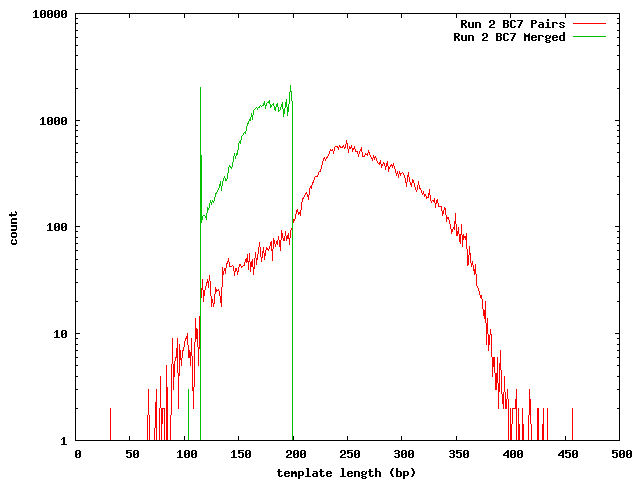 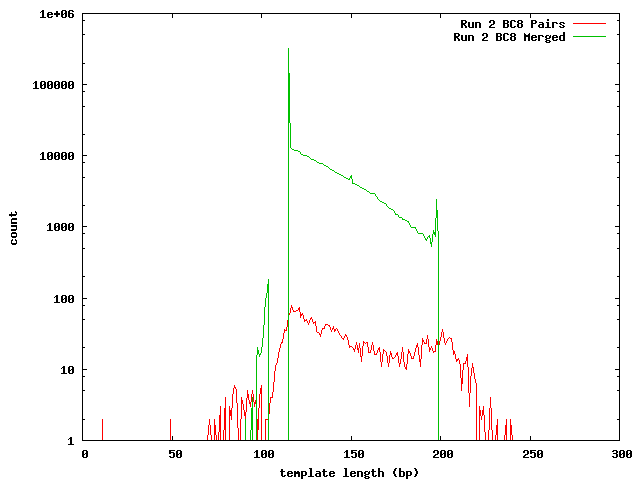 This process was repeated on the data after Quake correction. In addition to the paired reads and merge reads, Quake separates the reads whose pair could not be successfully corrected. 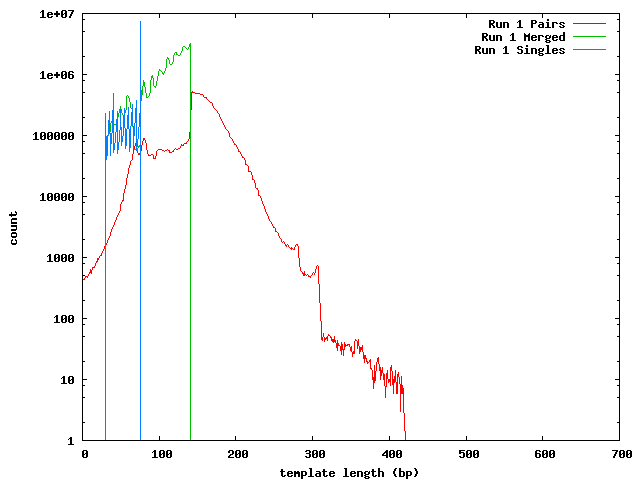 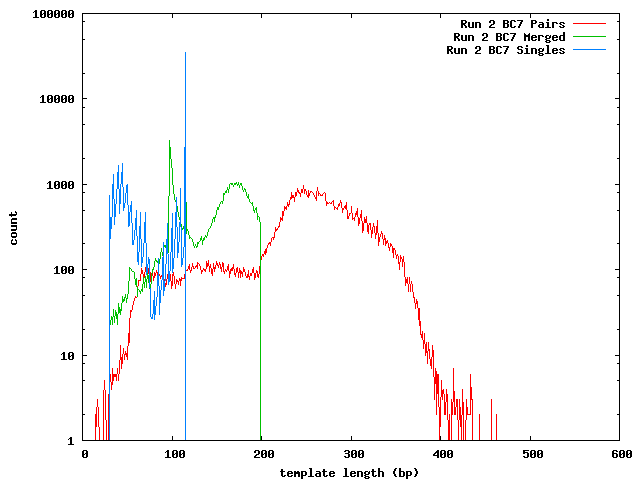 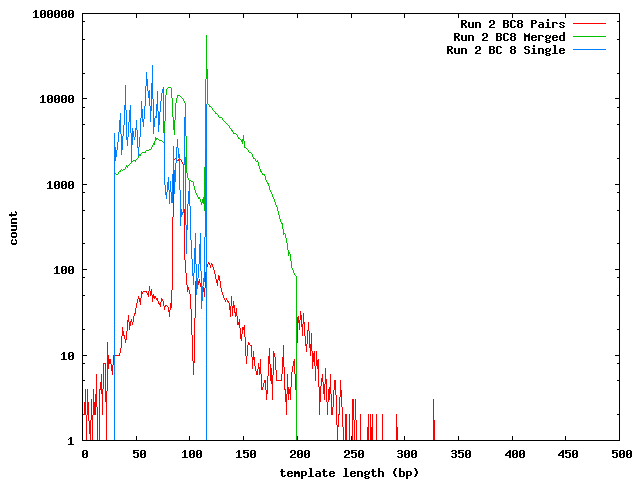 This process was repeated using the SOAPdenovo contigs from assemblies/slug/SOAPdenovo-assembly2/k47_w_454_contigs instead of the 454 reads as the reference. The shapes of these distributions follow the same patterns as the ones found using the 454 reads, although there are more mapped pairs because of the higher coverage of the contigs and we see some longer templates sizes than before. For the run1 and run2 barcode 7 pairs, the results involve some self-reference, since the previous estimates were used to build the contigs to which we mapped the pairs. However, the pairs for barcode 8 were not used in the assembly because of their negative mean insert size (most pairs overlap but not in a way that SeqPrep could merge). When these were mapped to the contigs, we saw the same pattern as before but with more reads that mapped successfully. 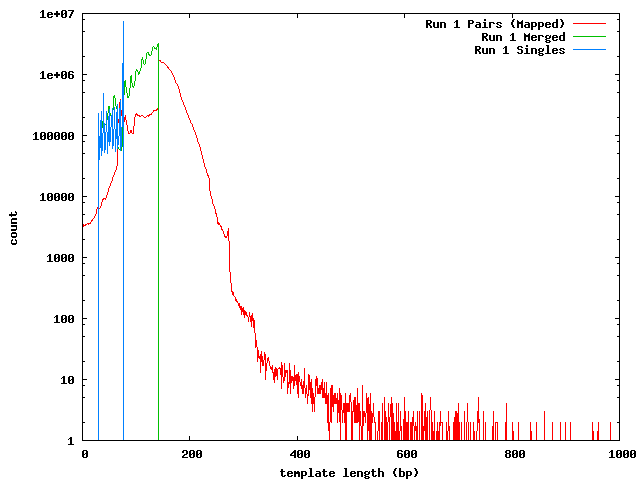 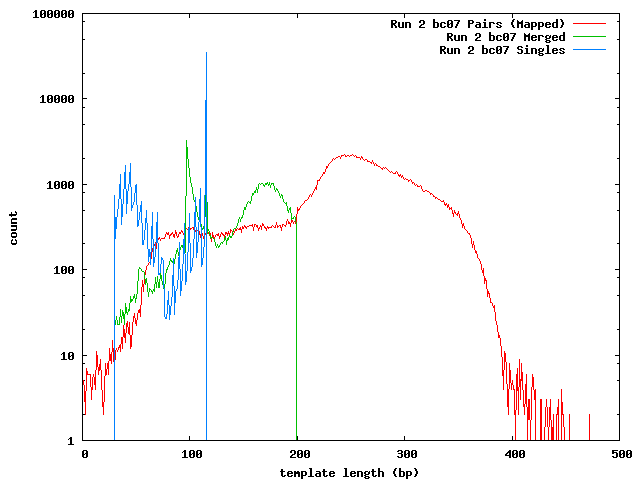 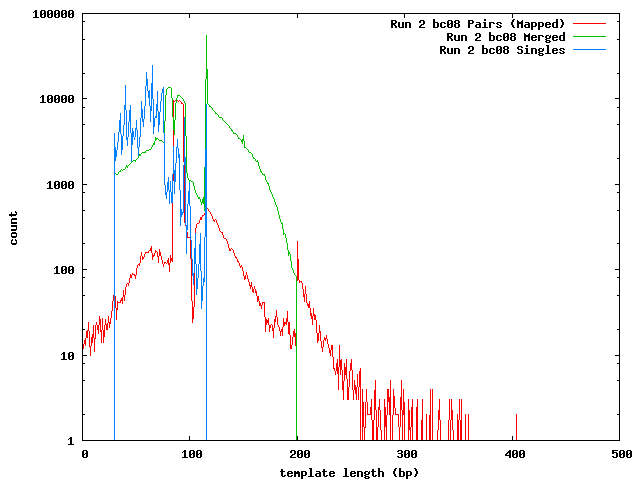