At UC Santa Cruz the banana slug is “the crux of the biscuit”, to quote Frank Zappa. 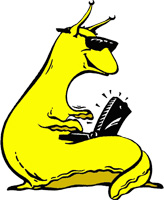 The CyberSlug is the local hero of the bioinformatics program. Perhaps Mike Welles, the graphic artist who retains copyright, was inspired by the cyberslug spending Friday evenings, after 1:00am in the computer lab solving important scientific questions. CyberSlug was originally licensed for use just by the CE and CIS departments at UCSC. When the Jack Baskin School of Engineering was formed, the license was extended to the whole school of Engineering.

A more complete set of cyberslug files can be found at http://users.soe.ucsc.edu/~karplus/cyberslugs